You think for a MOMENT that Mayor of Atlanta, Kasim Reed, and Georgia Governor, Nathan Deal, are gonna chance being the butt of about a trillion more media jokes, have our city hilariously dragged by Jon Stewart on Comedy Central’s The Daily Show, or have the state’s citizens lightly mocked again by Saturday Night Live? You think they’re about chancing all that mess again? 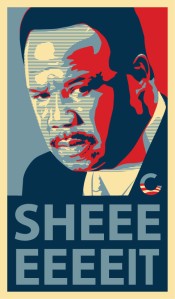 Ain’t no way in the devil’s hell the metro area is gettin’ caught out there like that again! I haven’t been outside today because I ain’t chancing that whole Freaknik on Ice thing that was going on here about 3 weeks back but I’m guessing that the good people at Goodyear and Michelin are going to be flush with cash from all the people that will be buying new tires after having to drive on the 18 inches of salt that was probably spread across the Atlanta interstates last night. Shoot, I can see Reed and Deal in their offices now prolly thinking:

“Winter storm? Oh we got something for that ass this time around! We laying ALL the salt on these streets. ALL OF IT!!! When we done laying salt, ain’t no mo’. Anywhere! For at least a year. We buying all the salt and it’s going in these streets right here. We watched the Weather Channel this time b*tches, it’s not a game! And the schools? Close them all…ALLUHEM! Shut down the computers, lock all the doors, melt down the keys to the school buses, ain’t no school, ain’t no teachers!  And yeah, it’s 50 degrees outside but you know what? State of Emergency, fool! We calling it right now! Just point all of your national guard trucks down this way and get ready to do work. We ain’t playing with you, Weather. Game time is for ESPN, we ain’t ’bout that life, son!”

As of right now, all is quiet on the southern front. But should this go from tentative to bad to worse, please believe that there will be no repeats. Embarrassed politicians are sure to see to that Walking Dead remake not making a repeat performance in my fair city. For that wisdom fueled by hindsight and shame I guess I should be grateful. Now if you could just do something about these area grocery stores because people people wilin’ out and shooting each other over bread and cookies and and that’s not what ANYBODY needs while standing frustrated in the express 15 items or less checkout line behind someone with a FULL BUGGY OF GROCERIES. That’s just too much.