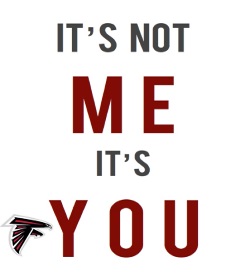 You know what, guys? Enough.

I’ve been a fan of you guys for just about 34 years of my life. My Granddaddy loved y’all when you arrived in this city in 1966 until the day he left this Earth. My Dad loves y’all lamenting the woeful Falcon teams he was offered autumn after autumn… and I love y’all, honest I do, but on the real, I’m tired.

First of all, let me say, it’s me, not you – nah, I’m lying – it is you. I cried my first Falcon tear at the age of 8 after that whole 4th Quarter Danny White to Drew Pearson debacle at Atlanta Fulton County Stadium. I’ve watched you singlehandedly get Jerry Rice into the pro football Hall of Fame; to this day I’m really not that sure if Rice was that good or if he was just the beneficiary of playing the Falcons twice per season for the majority of his career. I watched a Falcons #1 overall draft pick stink to high heaven on the football field and then, as a goof, rob a pizza delivery guy with a pellet gun. I’ve watched beating after beating in prime time appearances, I’ve watched Deion high step 80 yards for a touchdown as a 49er, I watched Warren Sapp do a booty dance in the Georgia Dome end zone as a Buccaneer, and save this year’s vanquishing of New Orleans, I’ve seen Saint fan after hideous Saint fan wearing gold lemay pants and matching teeth celebrate up and down Northside Drive. Now Jesus hates us because we done demolished two churches to make room for the construction NonEssential Field. To punish us, He took away all ability to play defense, win a game more than 2 miles from the Georgia Dome, or protect a QB. The second they cut the ribbon on that place I fully expect that stadium to implode and crumble into a glowing ball before disappearing into nothingness like the Poltergeist house.

Do you fellas understand how tough it is to be on the ass end of the “It could be worse…” argument? For years that was saved specifically for the Raiders and Cardinals but now fans of teams like the Bengals are talking amongst themselves after a loss and saying, “Well, could be worse, we could be Falcon fans.” Do you know what that does to my psyche? I’m a grown man; I can’t be feeling like this on a Monday when I’m supposed to be productive!

So fellas, I’ve gathered you here in this room with these ham sandwiches, chips and Sunny Delight to tell you that I’m taking a break from this thing. And I know what you’re thinking to yourselves, guys. That Steeler fans, Giant fans, Packer fans and the like don’t take breaks when their guys suck. You’re right, they don’t. But those teams also have built up good will in the way of multiple very shiny trophies in their team headquarters. The only exception is Philadelphia and quite frankly those folks aren’t all the way sane to begin with.

All I have is Samuel L. Jackson and a catchy slogan.

Now I will say that 34+ years of fandom won’t let me completely detach so I dare not tell that “I’m done” lie but my soul can no longer take the tease of beating Drew Brees one week only to make dudes like Teddy Bridgewater and Jay Cutler look like Hall of Famers the next.  A shiny headed Jermaine Jackson once said “…Don’t take it personal…” I have to do this for the good of my decent blood pressure ratings and heart healthiness. I still love you unconditionally but I will do so from a distance…

…from a smartphone mobile app as I stroll through the city with a pretty girl as the sun shines in our faces (shout out to my baby Olivia Pope). And perhaps as we walk on some soon future Sunday we’ll pass a sports bar and I’ll peek in and hear the pained groans and see the anguished looks on the faces of the red and black faithful; and as an autumn breeze picks up blowing freshly fallen leaves up the sidewalk I’ll think to myself “That was me once…” and then I’ll kiss the pretty girl on the cheek and we’ll move on up the walk further into the sunshine.