I wrote this piece for a friend of mine’s local digital magazine (you can check them out at http://www.ctpmag.com). He asked for an article on the Atlanta Hawks Tuesday night so I gathered all my Hawk-fan feelings and this is what came out. Since I haven’t really touched on Atlanta sports, something I’m pretty passionate about, much in this blog I thought I’d go all simulcast on y’all and post it here as well.  Here goes… 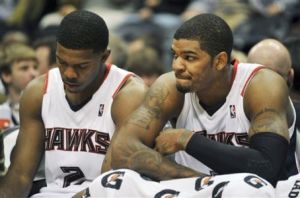 I knew this dude once; 90% of the time this dude would do something along the way to make me want to throw him off a cliff. He would say something inappropriate, he would spill a drink on the carpet, he would play all the wrong cards at the Spades table; basically when he would show up at someone’s party you would immediately want to find the event organizer and ask him why in the hell they would invite this dude knowing that he was going to do something to make you want to scream. And just when you want to tell him to turn around and go home and never come back or slam the door in his face altogether, you notice that he brought a bottle of that great wine or expensive vodka with him, or he walks in and has 3 gorgeous women with him that he brought just to add to the party vibe. And when he does that kind of thing you wonder why you were ever upset with him in the first place.

This, ladies and gentlemen, is like my relationship with the Atlanta Hawks.

I was born and raised in Decatur, GA which, of course, is right outside the great city ofAtlanta. I made a choice early in life that I wasn’t going to be like all the other bandwagon chasing “fans” in this city, I was going to be true to my civic surroundings and cheer for the home teams. That decision pertaining to the Hawks has been, at times, questionable at best. I watched them give Jon Koncak more money than he can count to score 5 points a game. I watched Cliff Levingston take the final shot in a playoff game against the Celtics when he was the fourth offensive option on the floor, I watched the Hawks trade Dominique Wilkins when they were the #1 seed in the East for freakin’ Danny Manning. I currently watch Josh Smith take horrible jump shot after HORRIBLE jump shot. The Hawks have done all they can during my time on Earth to either drive me to alcoholism or make me forget about them altogether.

But then, it’s like they peek into my house and see my suffering after they lose to Philadelphia by 30 points or get drilled by New Orleansby 40 and they say, “Hey! Let’s not kill Skrap today; let’s reward him for sticking through all of our crap over the years and do something nice!” then they step into a first round matchup against Dwight Howard and the Orlando Magic and stomp them into oblivion and after that you start thinking to yourself, “Well, that was nice but there’s no way that they win even one game against Chicago; ESPN said so!” But I turn the game on Monday night anyway and, somehow, they are shocking the Chicago Bulls in game one.  Amazed is an understatement.

For every real Hawks fan in this city and world this is the illustration of the life they live. The frustration, the ridicule, and the downright desperation to see something, anything go right and you see it go wrong at every turn and just when you’re ready to say forget it, they do something that reminds you of why you are a fan in the first place, they give you reason to believe. They give a glimmer of hope to the people peculiar enough to call themselves fans of the NBA stepchildren Atlanta Hawks.

None of this is to say that the Hawks will beat the Bulls and move on to play the winner of the Heat/Celtics series; personally I wouldn’t bet on that. But what I will bet on is that the Hawks will do just enough to excite you and get you fully on board for whatever comes next…until the next time you want to throw up your hands and say forget it. Until then…”GO HAWKS!”