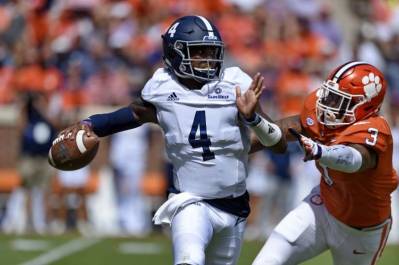 That kid in the picture in Blue and White is Shai Werts. Shai is the current starting QB at my alma mater, THE Georgia Southern University. Last week, Shai was nearly railroaded by police officers in rural South Carolina during a traffic stop for speeding (he was) and was arrested for having cocaine on the hood of his car (he didn’t).

Loose cocaine. On a moving car that was traveling 80 mph. And didn’t blow off. At all. YET, they said it was there. Even produced a field test that showed positive for imaginary cocaine. And locked him up.

The case itself and the report written by the officers was completely ridiculous. Look it up on the Google machine and read the story when you get a chance. It’s comical, it’s also frightening.

Its frightening because what if he weren’t Shai Werts the dual threat Georgia Southern QB that led the Eagles to 10 wins and a thrilling bowl game victory last year? What if he was just Shai Werts, rising senior and regular ol’ student at GS, another one of those brown kids with one of those weird names driving his Dodge Charger too fast through rural South Carolina?

Would anybody have cared when that brown kid’s name hit the blotter? Would alumni immediately start considering GoFundMe campaigns for legal help? Would there have been outcry for the body cam footage and for explanations of the inconsistencies shown in police reports? What if he was just a brown kid driving too fast and had imaginary charges pinned on him?

What if he wasn’t “one of OUR boys” and just “one of those boys”? What if?

Somehow I think the story would be different. I wonder how intense the support and search for truth would be for a brown kid that isn’t scheduled to lead us against LSU in 22 days? How quickly would that kid be thrown away as a bad egg? One of the element?

I’m glad the truth came to light for Shai. Glad all the charges were dropped, except speeding of course, he earned that one. I’m glad he’s able to play and resume life and eventually graduate and weave his way into normalcy after college football is done. I hope there’s some form of discipline for those officers that were an eyelash away from taking that all away, ruining that child, that football player, that son, that friend. And I pray for all the possible Shais that weren’t so lucky, who weren’t fought for and supported so fervently against bogus charges, and whose innocence wasn’t or isn’t considered because THAT brown kid wasn’t “one of our boys”.