The Discomfort of Love

AHH, THE DAY OF LOVE, Valentine’s Day. Money will be spent, flower and candy will be delivered, proposals will be offered, dinner will be had, and love will be made, all in the name of Cupid. I’m not one of one of these “down with Valentine’s Day” people that you may see around town. While I know that love should be shown EVERY day of the year, I certainly don’t mind lovers having their day to go all out for their special someone. I enjoy it actually. Now I can never trot myself out as some expert that knows what love is all about, if that were the case I’d have a significant other of my own to squeeze today; for all that I do not know about the ins and outs of how love works, I do know one thing, two things actually, about what ought be…and of course those things were taught me to me by my parents, who will celebrate 51 years together in less than a month; those things are that love is about acts of sacrifice and acts of loyalty. I have several pictures of my parents, far better than the one that I’m going to share in this blog but I think it fits. 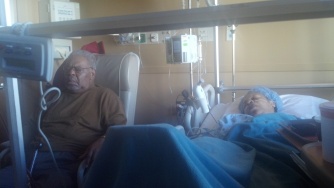 First of all, they’ll kill me if they see that I put this pic on the blog but I’m trying to illustrate a point here. A lot of people don’t see the challenging part of love, the part that isn’t so glamorous. People often see the nights out and the gifts and sexual positions that involve swinging from chandeliers but fail to take into account the challenges that come when the act of caring for someone trumps the act of giving gifts to someone. I snapped this pic of my parental units the day after my Mom’s recent surgery. There wasn’t much that Dad could have done for Mom as she was pretty uncomfortable, he couldn’t make her hurt any less, all he could do for his wife at that moment, honestly, was be there – so that’s what he did. He sat there in that uncomfortable chair, petted her and smiled, slept there right next to her like he’s doing in the picture, and when he wasn’t doing that he would simply look at her as if trying to will her better sooner – sometimes to the point where she would open her eyes and just say, “Would you please go home.” And he would, eventually, but not without a good degree of resistance and never before speaking with every nurse on duty to make sure that all would be well until he got back there because until she was fully well, he wouldn’t be.

There’s a certain amount of discomfort like that in real love; and it takes a good deal of sacrifice to drop your concerns for those of someone else. After half a century of marriage I think my old man has it pretty well covered but I’m pretty sure it wasn’t always that way. But eventually the lesson he learned was that love isn’t as tested in the good times as it is when smooth sailing is replaced by tough stretches. Times like when your spouse is in the hospital and there’s nothing that you can immediately do to make her better…or when jobs are lost…or when there’s been an argument…or on that day when for no reason at all you wake up and are just tired of seeing that same person next to you. But like Mom and Dad say, the sacrifices you choose to make for the betterment of the whole and the loyalty you have to that person you pledge your heart to push you through all the things that would otherwise attempt to drive a wedge.

Mom is better now, much better actually. Dad has a bad foot he’s dealing with but that’s not keeping him from his duties. I stopped by to see them earlier as Mom was preparing to go to her doctor for a follow up/physical therapy thing. Knowing about Dad’s foot, I offered to take Mom to the doctor so he could rest but he cut me off before I could even finish the thought. He wouldn’t have it.

His charge is to care for her personally even when he’s not feeling great and hobbling around himself; so come hell or high water, he’s doing it; because until she’s 100%, he won’t be either.

I hope all of those wonderful couples out and about today folks don’t forget to love completely, fully, even in the uncomfortable times when it’s not all dinners and cards and candy. Personally, I don’t know much about how to make love work but I’m thinking that the world needs more examples of that sort of thing, don’t you? Happy Valentine’s Day.