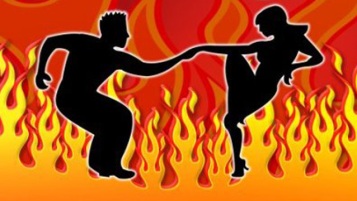 MY SHYNESS gets in the way, it always has. It sometimes takes a while to get my nerve up to speak to someone new or, in the case that I’m writing about today, to ask someone to dance. I enjoy salsa dancing; I tripped over salsa accidentally about 4 years ago and since then it’s been one of my favorite weekend activities. You might say, “You’ve been doing it for years, why in the world are you shy about asking someone to dance?” That’s a valid inquiry. While I manage to acquit myself in a decent fashion on the salsa floor, I’m not the slinky, dark haired, salsa maven that women watch the entrance for at a salsa party. On the hierarchy of salsa dancers there are the Ricky Martin look-alikes at the top of the totem pole and then a little further down are the guys like me that look like part time NFL fullbacks. But I’ve done better lately, in most cases I can walk right up to a lady and lead her to the dance floor and do just fine (for an NFL fullback look-alike), however, there are a few dancers that I can’t seem to break through with, like this one lady for instance…

She’s gorgeous, light skin about the color of a scoop of butter pecan ice cream, long flowing hair that she usually keeps back in a ponytail when she dances, built like a ballerina, very taut, and she moves like liquid sunshine on the floor, people often stop just to watch her, the cliché poetry in motion is fitting, though an understatement. We’ve always been friendly with one another but when it comes time to dance I would always flake deeming myself not worthy to dance with someone in her rhythmic league. But this time was going to be different! I went to the social that night with the sole purpose of jumping the hurdle and dancing with her, gap in skill level be damned, and I was gonna do well, and she would smile at the end of the song and give a hug and say “thanks, that was awesome”, and I’d have finally shook off my own doubt and danced with her. I caught her eye from across the room and gave a wave which she returned, she was about 30 feet away when I got up from my chair and started to make my way over to her; then I made the mistake of looking behind her at the entrance to the room. And entering the room to the delight of the female dancers was: This M*therf*cker.

He’s the guy who doesn’t have to pay to get into any spot that he goes to. He is the guy who stalks the dance floor watching your moves for no more than 3-5 seconds before slithering away with his nose skyward. This M*therf*cker. He is the guy that women line up to dance with, the guy that likely gets standing ovations walking from his bed to the bathroom first thing in the morning. This M*therf*cker. The man who has danced with every woman in the room and all but 3 of them needed a cigarette and a change of undergarments when they were done. To my dismay he was headed straight for the woman that I was headed to dance with and all I could say to myself was “Oh no! Not This M*therf*cker!” He crept up behind her and put his hands over her eyes, she spun quickly and, seeing who it was, smiled and gave him a big hug around the neck. He winked and gave the coolest, slightest hint of a smile out of one corner of his mouth, before tilting his head toward the dance floor as if to say “Shall we?” Of course she did.

He’s a good dancer, so good that apparently it doesn’t matter what he wears to the spot. He had on some black shoes made from some former swamp dweller – crocodile, alligator, snapping turtle, who knows – with the exaggerated pointy toe that was turned up like the 80s wrestler, The Iron Sheik; his jacket was brown and looked crocheted to be honest with you, his skinny jeans were extra, extra skinny, it’s highly likely that if you looked hard enough you may have been able to see his pulse through the denim. For heaven’s sake, he was so cool on the dance floor that he didn’t even take off his scarf, a thick grey number that was tied around his neck which was great for the 30 degrees outside but completely out of place for the sweat box that the dance area had become. But none of that mattered as he broke out double and then triple spins and then spun her more times than anyone could count. They were a silky blur feeding off of one another’s talent; whirling and moving and shining their way through Curet Alonso’s “Caonabo”…

…to the point that there was a growing horde of people that stopped dancing to watch them. They were amazing, it was a spectacle with the beauty’s ponytail whipping through the air and his scarf (really, dude, it’s 80 degrees in here, easy) flapping in the breeze he created by moving to keep pace with his partner; and when the nearly 6 minutes of the song were over and he dipped her looking down into her eyes as if in an attempt to hypnotize the crowd hooted in approval of their performance. He hugged her lightly and offered that same half mouthed smile before adjusting his scarf, scanning a few of the admirers of his form there gathered, then slithered away leaving a sparkly trail of awesome behind him. That dude had pulled out moves that I hadn’t even imagined possible before, you think I was gonna ask her to dance now after Salsa Baryshnikov put her through the paces? Heck no! The Butter Pecan Beauty fanned herself with both hands after their dance floor workout with a satisfied look on her face then started in my direction as I sat there just off the dance floor a few feet away from where she’d just danced. She sat next to me and said hello, small talk ensued, but nothing materialized. My will was shot; I couldn’t go behind that dude. I looked at my watch, yawned, made up an excuse about an early morning and broke out of there.

Eventually, I’ll dance with her, and it’ll be great and I’ll find that this whole not good enough thing was just me psyching my own self out. But when I do please believe that I’m doing it early in the night just in case dude shows up trying to thwart my dreams again. I’ll keep you posted.