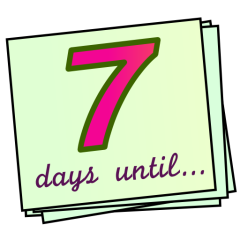 It’s that time of year again, that’s right, we’re swiftly approaching the anniversary of the day that I discovered America! Given that I make it another 7 days, I will say goodbye to another year and start over with another one. I’ve started to notice that birthdays start to morph into something else as you get older. There used to be a time that birthdays were looked at with great excitement, you begged your Mom for a party at ShowBiz Pizza (old school, I know) somewhere around age 9-10, then you looked forward to 13 so you could be grown (in your crazy kid mind), then 16 so you could finally get behind the wheel of that car, then 18 because you’re a freshman in college and you think you’re grown (in your crazy kid mind), then 21 because you can throw away that fake ID and buy a bottle of your own and so on…

Funny thing for me is, that I stopped looking forward to birthdays because they became a reminder of how fast things were going. I’m not sure what it is about time that seems to go so slowly when you’re a kid but then ramps up to hyperspeed once you clear 30. Every birthday has a way of shedding new light on benchmarks that you haven’t found a way to reach yet and that can, for some folks, be a depressing thing when you see another birthday on the horizon; I know this because it was how I viewed my upcoming birthdays. Not married, career hasn’t taken hold, the chapters of hundreds of books written but none of them finished; the focus ever brighter on goals that have found their way into the file marked “Incomplete”.

But why look at this as a negative. I mean, you’ve got more days right? Heck, even with my little shortcomings I enjoy getting another year because you can’t judge yourself based on where you are, unless you’re moping and not doing anything to change your current place in which case, you’ve got some work to do. And even if you’re not in the place you want to be it’s never too late to get going as long as you’re on this side of the dirt and inhaling and exhaling repeatedly. There’s nothing stopping you from being everything you’re destined to be but you so by all means, get moving, there’s still time!

I plan on enjoying my birthday in a scant 7 days, feel like God is entrusting me with another year because He’s trusting me to get something done with it, guess I’d better get to work, huh?