Church is Ruining The Theater…kinda

I had the opportunity last weekend to see one of my uber-talented friends, Kelsey (www.kelseyscott.com) perform in the stage play, What I Learned in Paris, written by renowned author Pearl Cleage. It was a fantastic play and I don’t say that because I know and once had a monstrous crush on Kelsey (that I disguised by inviting myself over to her house to play Super Mario Brothers on a near weekly basis when we were in high school), but because it was a fabulous production. The 75% that I was able to concentrate on was among the best times I’ve ever had in theater. Why only 75%? Well, I’m glad you asked.

I relished this opportunity to go to the Alliance Theater to see this production because it was the first play that I’d been to in quite some time. I’d gone to see the stage play Dreamgirls starring Jennifer Holiday at the Fox Theater some years back and remembered that I couldn’t get out of the venue fast enough because some of my “cousins” (a.k.a. Black people) couldn’t stop talking to the characters on stage. Look, I get it, I have been moved by performances before, where I’ve wanted to jump up and shout at a character or react audibly to any number of goings-on while watching actors act but common sense tells me not to do it for a number of reasons, not the least of which being that others in the gathered audience DID NOT COME TO SEE ME! In a short statement on the subject, that theatrical experience at the Fox was the most ratchet-ass, hoodrat infested experience that could ever have existed under that legendary roof.

But this was different. This was the Alliance on the play’s official opening night. There were people in attendance who actually had “Professional Snob” and “Experience in High End Hobnobbery” written in their resumes. There was no way possible that there would be hundreds of people screaming their approval or displeasure to an actor’s on-stage situation like this was a Showtime at the Apollo taping. So there I sat with the smell of haughtiness and entitlement hovering about and I was right, there weren’t hundreds of people taking their turn to interact with the players on stage. There was one.

And she was sitting on the front row. In the center. And everyone could see her.

Every snippy line offered up from the stage was met with an “UH HUH!” Every piece of heartfelt dialogue from the play’s energetic lead was met with a “THAT’S RIGHT, GIRL!” Oh…and the fingersnaps. Oh, she went on and on with the fingersnaps as if at some point she had some sense of consciousness that she couldn’t applaud every piece of the script that she liked, that would make her out of line; but raising both hands in the air and snapping her fingers loudly like some beatnik at a back alley poetry slam, now THAT made her a reasonable member of the audience.

After the show, of which 75% I immensely enjoyed, I got to hang out with some of the cast at a post-show banquet at the Alliance and then later sharing a couple of slices at a pizza joint just outside of downtown. (Skrap’s Note: If you want to draw stares and feel like somebody you should probably go to a pizza joint at 1:30am in a suit with two actresses in cocktail dresses, I did.) I couldn’t help but ask the play’s lead, Crystal Fox, (hella cute, fought off the urge to have a crush on her) “Hey, what did you think of the lady in the front row talking to the stage” to which her reply was “Yeah, she kinda took the play to Church, huh?”

Now being a choirboy of sorts, as I proved in this little number, I know how Church, the Black church anyway, works. Something comes from the pulpit, something comes back in response from the congregation; call and response; it’s been that way for a long time and will continue for a long time more. But what happens when you get a person whose only experience in large crowds is at church and you then place them in another large crowd where call and response is not protocol? Well you get the lady front row center whose sole purpose is to let the stage know that, artistic timing be damned, she is pleased with what is going on up there.

Why get excited and holler out “Say it again, girl!” as if the actor onstage is going to say him/her self, “You know what? F**k this script! I think I WILL repeat that line because THAT lady down there told me to!” Why give the actors one more thing to think about? They only have cues and stage marks and, oh yeah, LINES that they have to remember all while you’re down there carrying on like you’re at a camp meeting revival waving one of those MLK fans with the funeral home advertisement on the back. 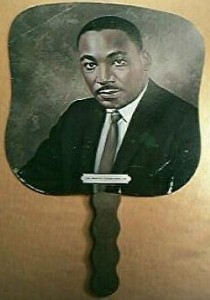 But you’re not a distraction, right? You’re just enjoying the show while keeping everyone else from doing the same. What a busta! It’s not all church’s fault though, some people just don’t have either the good sense that God gave them or home training…maybe both. I just wish that they weren’t allowed in theaters. Ever.

Now if you’ll excuse me, I have to purchase a ticket to the show so I can see the 25% of the show I was too annoyed to see and enjoy the first time.