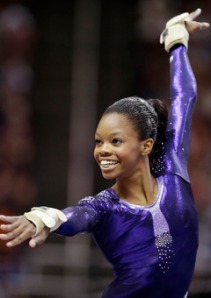 The Olympics are inspiring. What began, for me anyway, as largely an exercise in boredom has begun to gain momentum in such a way that it is now a fixture on my television set. Strangely, my favorite event to watch has been rowing which is odd since I’ve never been on a boat that didn’t have Royal Caribbean written on the side. Water Polo is pretty cool in that no one is arrested after having tried to drown a person with a ball, and of course swimming is cool, not for the awesomeness that is Michael Phelps, but tuning in to see if anyone at all that swims in Lane 8 can finish anything better than last (Honestly, watch the Lane 8 swimmers, they are a missed breath away from drowning in the pool nearly every race). However, how could you not be captivated by the achievements of the women’s gymnastics team of the United States collectively winning the team gold and then having that followed up by an individual gold medal by brand spanking new American sweetheart, Gabrielle Douglas.

Oh, and about Gabrielle.

The whole of Black America last week, mostly the fairer sex of Black America, was ready to take up arms in defense of the young star after some ne’er-do-well on Twitter took to talking about her hair not being done for the competition. Absolutely the most  inane thing for a viewer to worry about regarding an Olympic athlete considering full twists, flips, and dismounts are likely hard to do with your luxurious hair flying in your face. It takes a certain amount of hate in your heart, and I’m not talking about “hater” hate – I mean for real honest to goodness HATE, to even bring up something like that. Gabrielle is a beautiful girl, full of faith and love for God, with mounds of talent that moved her from an invited special guest to a gymnastics meet in New York to an addition to the US Gymnastics Team, to the best gymnast in the World in a matter of months. She has handled everything these games have handed her with unequaled class and grace which I’m happy for because the Black women both for and against her have been less than graceful.

On one side you have the stupid sect that laugh and talk about the state of her hair as she competes on a world stage, on the other you have the overprotective play aunts that wag the finger, say “oh no you didn’t” and then after her outstanding victory, one which lifted the spirits of just about everyone in this country, even me who largely ignores gymnastics as I find it boring, the pro-Gabbys start giggling and getting behind pictures like this one… 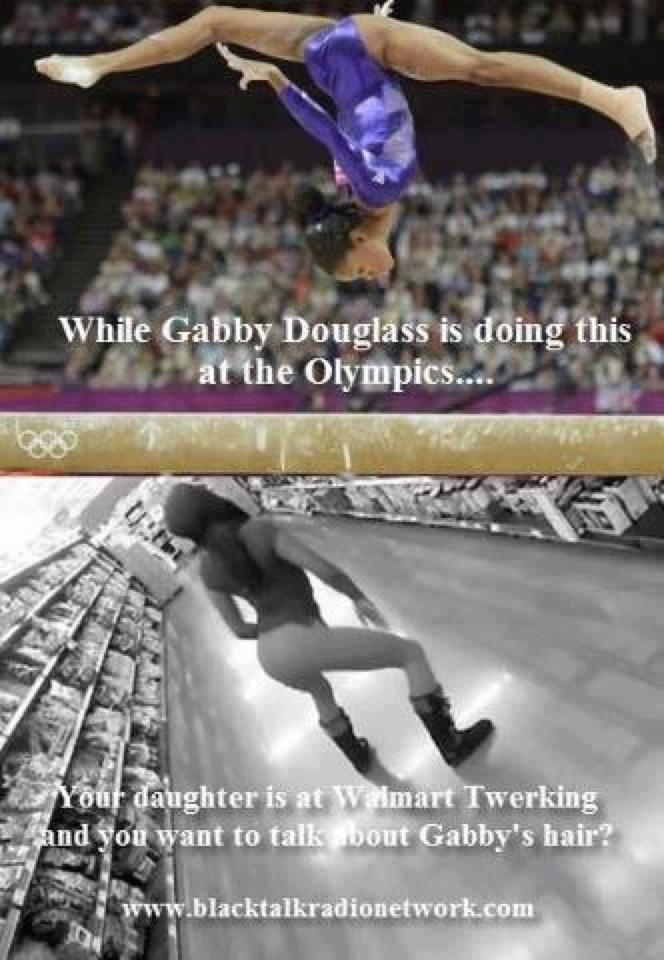 …as if the greatness and achievements of one of our daughters gives us license to point fingers and ridicule the folly of another of our daughters! HA! Is it stupid to talk about a world class athlete’s hair? Absolutely, about as stupid as it is for someone to then say, “well, yo’ daughter is somewhere out on the ho stroll selling booty” in Douglas’ defense.

Does a person even know that? Have they seen said daughter on the stroll?

People’s unkind nature is not a new thing, if it were then the vast majority of us wouldn’t have grown up quoting that whole “Sticks and Stones will break my bones but words will never harm me” thing as children.

Words will never harm me.

I think we forget that when we are quick to come to the rescue of the things that we like. People run to the defense of President Obama in the same fashion, never mind the fact that every President in the history of the U.S. has been talked about like a dog – our current President is no exception – current detractors simply have a few more adjectives to use at their disposal due to his race – but that doesn’t stop him from being what he is like I said HERE. Remember the “F*** the President” stickers that people had on their cars when “Dubya” was in office? The same people that giggled and laughed at that lose their minds and cry foul and contemplate murder when they get behind a car that has a “Nobama” sticker on it. He’s the President, not only is he the most powerful man on the planet, but it’s also his turn to take some hate on, it’s his job. And trust that I get it, he’s a Black man, I’m a Black man, I going to venture a guess that I’m more likely to raise an eyebrow over things said about him than I would if, say, democrat Al Gore, were in office. But while the words of the President’s detractors don’t make him any less the President, the ranting and raving of his supporters are likely doing nothing to make those detractors stop talking. At the end of the day he’s still the President and the people on either side are nothing more than out of breath screaming at each other.

I’m guessing that at some point last night President Obama, the first Black President of the United States (even if halfway) got on the phone in the Oval Office and called Gabrielle Douglas, the first Black all-around gymnastics champion in Olympic history and their conversation had little to do with his birth certificate, her hair, their color…or the people ranting about the both of them over the internet machine.

Skrap’s Note: The opinions here are of the author, please do not take offense if you resemble any of the said comments. Remember, words will never harm you! Have a great weekend, everybody!