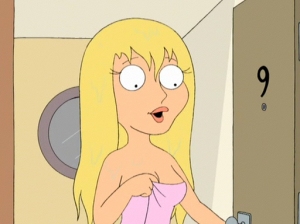 Hey all. I’m a huge fan of the show Family Guy. A few seasons ago one of the characters, Brian, was in a relationship with a young lady named Jillian, a beautiful blonde with a nicely drawn body who was also about as dumb as a box of rocks. The back and forth between Brian, an intellectual, and Jillian, a half wit, was oft times hilarious and perfectly illustrated the lengths that some of us guys will go to just to have a beautiful woman on our arm…but is that illustration realistic or just for kicks and giggles by Seth MacFarlane and his crew of writers? According to a few friends of mine that situation is not too far from fiction.

I wrote a blog a few days ago that told of a roundtable with some of my friends, during that conversation there was a consensus that when we’re talking about the ideal woman we would much rather have a woman with intelligence. What I didn’t expect from sharing that was that a couple of my friends remarked that men wanting a intelligent woman wasn’t realistic, rather, men wanting a less than bright bulb as a mate has made some women act a little dumber than they are for the sake of getting attention from a man. In the case of Brian from the aforementioned Family Guy he knew going in that Jillian was a few doughnuts short of a dozen but he remained in the relationship because of her good looks and what I’m guessing might have been some great animated sex. Jillian wasn’t acting the part or dumbing herself down in order to gain the affections of a man, it’s simply who she was; but apparently something, likely desperation, is causing this to happen in real women in these times. I found that hard to believe but I’m told that this actually happens and I have no reason to think that my people would lie to me.

I won’t count myself as the smartest man on the planet, mySATscores didn’t blow any schools on my list away and my high school and collegiate GPA left a but to be desired but my subjects and verbs agree 97% of the time and I’ve read more than 17 books so I think that makes me a little intelligent. Even in my “tad bit intelligence” I can honestly say that I’ve never wanted a dumb girl, and more than that, I wouldn’t want an intelligent girl that was acting dumb just to get my affections. That seems incredibly, well, unintelligent. I asked around and the reasoning that I got was that men are intimidated by a woman that can hold her own mentally so women have to pump the brakes on their mental acumen in order to not chase guys away because Lord knows said woman will end up alone if she lets on that she’s interested in more than the color of her next pair of shoes. While there may be a little truth to the intimidation factor in some cases (I’ll go ahead and just speak for me here, I won’t assume other guys feel this way) I’ve still never wanted a dimwit, that’s just no fun, it’s like playing Madden against the kid down the street that was born with no thumbs, sure you win by a large margin but you know that your opponent was overmatched.

I’m guessing that some dudes would want a dull knife for obvious reasons (easier to coerce into horizontal dealings) but I would still like to think that guys are not at all the dinosaurs that we’re suggested to be. More than that, I would love to think that women aren’t falling victim to the fallacy that men aren’t willing to deal with a woman that actually chooses to use and take advantage of her brain so she chooses to play dumb just because. Is this true? Men, do you like an intelligent woman or do you chase after the lesser thans because they are an easier target? Women, are you true to yourself or are you “playing Jillian” and holding back who you truly are in order to keep your man options high? It seems odd to even have to ask this but since it was brought up to me I figured I might as well put it out there and see what sticks. Let me know what you think.