Things I Learn From Ric Flair – The Lent Edition

It happens to every writer. That period where you sit down to write, place your fingers on the keyboard and the words just won’t come to you. Try as you might and as long as you sit you are unable to muster even one creative thought to share. When these times come you have to find a muse of some sort to break down the wall, it may be a personal story, it may be message from a sermon you heard at church; what’s my muse? Ric Flair. 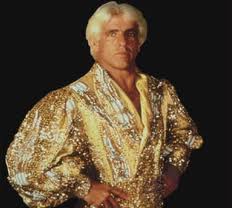 That’s right, the Nature Boy. The most charismatic wrestler that the world has ever known serves as  a point of inspiration for my writing. Because of this, I have made an executive decision as the owner of The Mind of the Last Atlanta Native, Inc. to dedicate every Friday blog to things I learned from Ric Flair. So without further ado, I give you the Lent edition of “Things I Learned From Slick Ric.” We’ll see you after this short 2 minute video…

Thank you Ric! Much oblige, sir.

Ric Flair, in his insanity, has taught us a valuable lesson here pertaining to our current sacrificial season of Lent, where many among us fast or abstain from something that proves itself detrimental to our relationship with God or a healthy way of life. I’ve heard many people in recent past that have chosen to take part in fasting this season talk about how hard it has been; and it is. To give up something that you love, that you’ve acquired, that you’ve come to do every day, that you crave, is a very hard thing. However, I think what makes it harder for some folk is that their focus is on the thing that’s missing rather than the thing that is to gain in their sacrifice.

Since I was a little boy Ric Flair has been a self centered, jet flyin’, limousine ridin’, wheelin’ and dealin’ son of a gun (by his own admission). Ric has had cars, Ric has had girls, Ric has had custom made suits, alligator shoes, and Ric has had money, lots of money; and based on how much he always talked about these things he enjoyed all of this an awful lot. However it comes a time in all of our lives when we have to sacrifice the things we like for the greater good, isn’t that right, Ric? You see, there are things that we have to give up in order to gain a better way of life, a better environment, and a higher mindset. Sacrifice, and the internal pains that it causes, are necessary if we ever want to enjoy the life on the next level. Because of this, we have to give up the things that hold us onto this level and in those surrenders is the key to our admission to the next level. We have to be willing to forfeit all that we think we are and stand naked before the world in a show of our readiness to move beyond our current station and take our rightful place in a higher calling, right Ric? So I ask you?

What is that Perry Ellis sweater you are throwing to the ground? An addiction to Facebook?

What is that Italian custom made suit that you are giving up? Is it a habit? A fast food joint?

What is that gold Rolex that you are willfully submitting? Is it the “horizontal dance of love”?

What is your Gucci shoe that you’re firing into the crowd? Limiting your TV time?

What are those slacks that you will discard as if nothing? An unhealthy relationship or eating habit?

Whatever it is, do not focus on that thing that you now miss, rather, focus on the higher calling that awaits you on the other end of your season of sacrifice, whether it be it a better understanding of God and his will for your life, or the 3 month Presidency of a Professional Wrestling organization. And when the devil comes to tempt you with all of the things that you think you’re missing, just call him a “jackass” and drop an elbow on him in the center of the ring.