This sermon brought to you by the fact that I’m an Atlanta Braves fan, a life long Baptist church member, and that I have far too much idle time on my hands once I get off work some evenings.

Brothers and sisters, earlier this evening we got the news that our beloved brother Chipper Jones of our once great but now mightily struggling Atlanta Braves was an overwhelming pick to be one of four new members of baseball’s 2018 Hall of Fame class. Brother Chipper manned third base, the hot corner, for the majority of his 19-year career in major league baseball, all of which was spent with the Atlanta Braves.

[A tambourine shakes in the congregation]

Brother Jones was the #1 pick in the 1990 Major League draft and after spending some time in the minor leagues came to Atlanta in 1995 and became an instant star. Now I can go on and on about how the Lord blessed Chipper with the ability to hit with equal skill from the left or right side of the plate – even though everyone knows he had more pop from the left side.

[AMENS from the congregation]

We could talk about his .364 batting average that won him a batting title or his 1999 National League MVP

Or we could talk about how the Lord used him to systematically and oft times single-handedly dismantle the Satan-led tribe called the New York Mets.

[“YESSUH! EVERY YEAR!” from the Associate Ministers pew]

If you would, turn to your neighbor and say “Neighbor.”

The preacher is gonna talk about…

[Congregation] The preacher is gonna talk about….

The Blessing of No.

[Congregation] The Blessing of No.

The simple fact is, brothers and sisters, there was someone that the Braves wanted more than Brother Jones, the talented infielder from Florida. They wanted a hot shot pitcher named Todd Van Poppel, the name sounds like money, his right arm WAS money. A senior in high school with a 98-mph fastball…

[ANOTHER DEACON: “He had a mean Uncle Charlie, Bishop!”]

…and the Braves wanted him badly. But Brother Van Poppel wasn’t really interested in the Braves. He wanted to go and play college baseball and play for the Olympic team so the Van Poppel family told the Braves no. The Braves had sent everybody, managers, scouts, even Hank Aaron out to meet with the Van Poppels but there was no interest…

…so with that #1 pick the Braves took young Brother Chipper and brought him into the fold.

Now as it turns out, Brother Van Poppel was indeed drafted in the 1990 draft by defending World Series champion Oakland Athletics going against what he had told the Braves all along about playing college ball. The Athletics had shiny new rings, a shiny new trophy, prestige, notoriety, in short they had all the things that the Braves didn’t have; the things that made it easy to tell the Braves “No”.

How many of you have felt like the Braves? All the potential in the world but written off, by friends, family, a significant other, because of what your present looks like?

[Raised hands and affirmative shouts from the congregation. Pastor takes a sip of water and continues]

[Hammond Organ pipes up, drummer stops texting his girlfriend and gets in position]

…because if you focus on your all your No’s, you’ll miss out on your future Yeses.

…if the job tells you no, consider it a blessing because you can focus on the better job on the way.

…if that girl or that guy tells you no, consider it a blessing because you can prepare yourself for that woman or man that’s REALLY meant for you that’s on the way…

[PASTOR ALL IN NOW]

…and if a right handed power pitcher named Todd Van Poppel with a mean curveball, and more talent than one 18 year old should have looks you in the face and tells you no then you throw your hand up and wave goodbye to that future oft injured, underachieving, journeyman pitcher with a career 40-52 won-loss record and a fastball that has no movement…because the one that told you YES…

[MEMBERS RUNNING AND SHOUTING IN THE AISLES, USHERS CHASING PEOPLE WITH SHEETS]

…the one that told you yes ends up being EXACTLY what you need hitting; for power and average, great glove, solid baserunner, he literally carries your franchise and becomes one of the top three switch hitters in history, arguably of the top three third baseman in history and, now, a first ballot Hall of Famer. The no you got was the start of your turnaround, that no you got was the reason you’re in as good a position as you’re in right now. Everybody throw your hands up and wave goodbye to those Todd Van Poppel’s in your life! Look at your neighbor and say “BYE, TODD!”

Now, if you got the faith and know that your better is about to come through for you, high five about 8 or 9 people and tell them, “I got a Chipper coming!” then give God the craziest praise you got!!!! 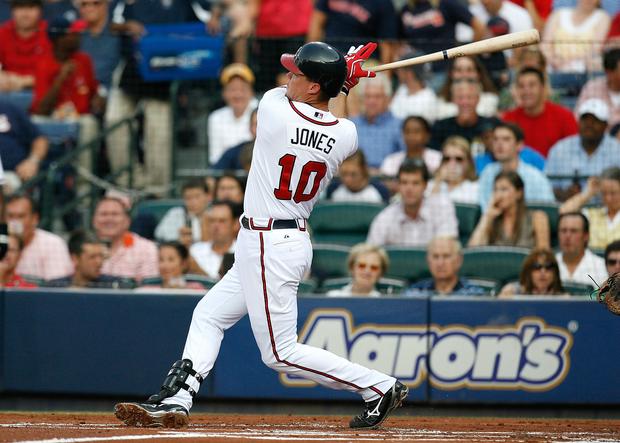